In 1830, Michael Faraday showed that if electricity is passed through a solution of an electrolyte, chemical reactions occurred at the electrodes, which resulted in the liberation and deposition of matter at the electrodes. These results suggested the particulate nature of electricity.

In mid 1850s many scientists mainly Faraday began to study electrical discharge in partially evacuated tubes, known as cathode ray discharge tubes. A cathode ray tube is made of glass containing two thin pieces of metal, called electrodes, sealed in it. The electrical discharge through the gases could be observed only at very low pressures and at very high voltages. The pressure of different gases could be adjusted by evacuation of the glass tubes. When sufficiently high voltage is applied across the electrodes, current starts flowing through a stream of particles moving in the tube from the negative electrode (cathode) to the positive electrode (anode). These were called cathode rays or cathode ray particles. The flow of current from cathode to anode was further checked by making a hole in the anode and coating the tube behind anode with phosphorescent material zinc sulphide. When these rays, after passing through anode, strike the zinc sulphide coating, a bright spot is developed on the coating. 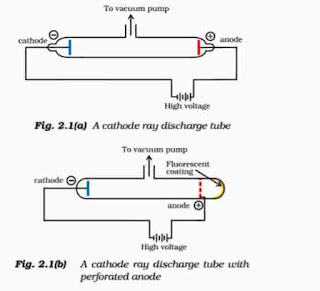 The results of these experiments are summarised below.

(i) The cathode rays start from cathode and move towards the anode.

(iii) In the absence of electrical or magnetic field, these rays travel in straight lines.

(v) The characteristics of cathode rays (electrons) do not depend upon the material of electrodes and the nature of the gas present in the cathode ray tube.

Thus, we can conclude that electrons are basic constituent of all the atoms.

Charge to Mass Ratio of Electron

Charge on the Electron