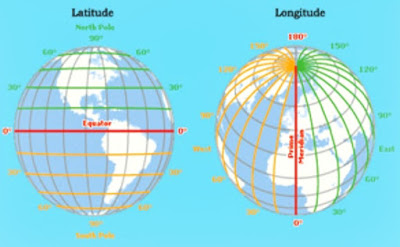 In the previous chapter, you have read that our planet earth is not a sphere. It is slightly flattened at the North and the South Poles and bulge in the middle. Can you imagine how it looks? You may look at a globe carefully in your classroom to get an idea. Globe is a true model (miniature form) of the earth (Figure 2.1). 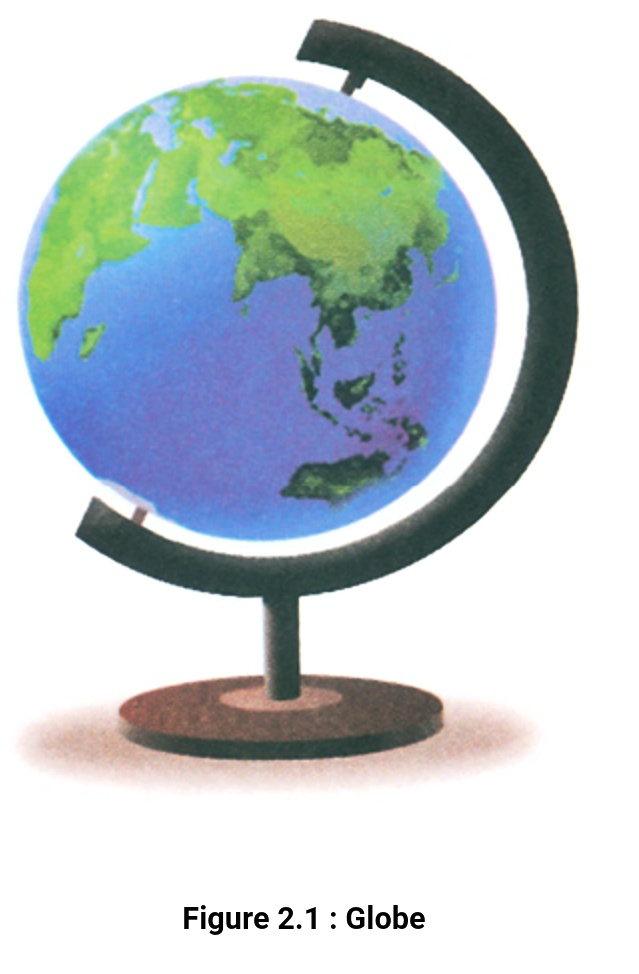 Globes may be of varying size and type – big ones, which cannot be carried easily, small pocket globes, and globe-like balloons, which can be inflated and are handy and carried with ease. The globe is not fixed. It can be rotated the same way as a top spin or a potter’s wheel is rotated. On the globe, countries, continents and oceans are shown in their correct size.

It is difficult to describe the location of a point on a sphere like the earth. Now the question arises as to how to locate a place on it? We need certain points of reference and lines to find out the location of places.
You will notice that a needle is fixed through the globe in a tilted manner, which is called its axis. Two points on the globe through which the needle passes are two poles – North Pole and South Pole. The globe can be moved around this needle from west to east just as the earth moves. But, remember there is a major difference. The real earth has no such needle. It moves around its axis, which is an imaginary line.
Another imaginary line running on the globe divides it into two equal parts. This line is known as the equator. The northern half of the earth is known as the Northern Hemisphere and the southern half is known as the Southern Hemisphere. They are both equal halves. Therefore, the equator is an imaginary circular line and is a very important reference point to locate places on the earth. All parallel circles from the equator up to the poles are called parallels of latitudes. Latitudes are measured in degrees.
The equator represents the zero degree latitude. Since the distance from the equator to either of the poles is one-fourth of a circle round the earth, it will measure ¼th of 360 degrees, i.e. 90°. Thus, 90 degrees north latitude marks the North Pole and 90 degrees south latitude marks the South Pole.
As such, all parallels north of the equator are called ‘north latitudes.’ Similarly all parallels south of the equator are called ‘south latitudes.’ 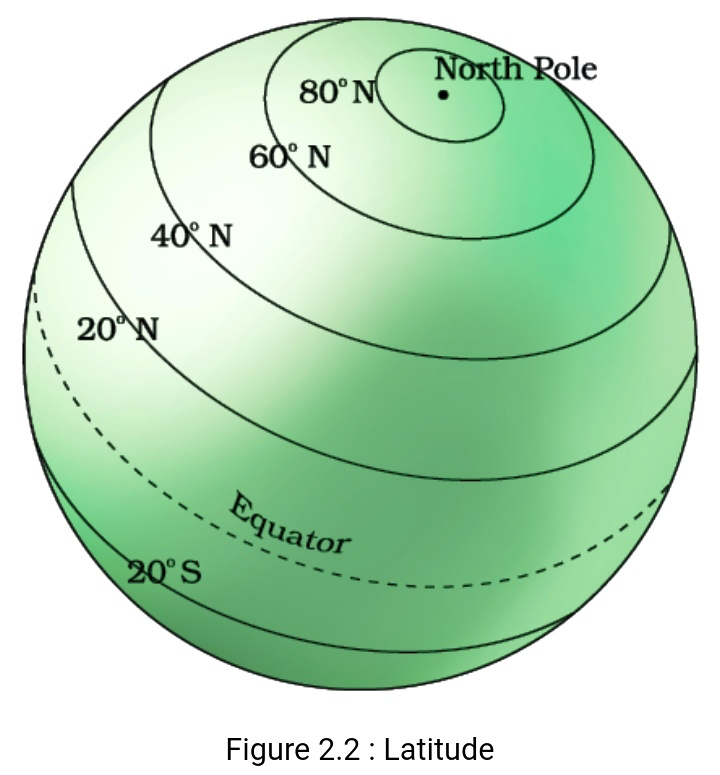 The value of each latitude is, therefore, followed by either the word north or south. Generally, this is indicated by the letter ‘N’ or ‘S’. For example, both Chandrapur in Maharashtra (India) and Belo Horizonte in Brazil (South America) are located on parallels of about 20° latitude. But the former is 20° north of the equator and the latter is 20° south of it. We, therefore, say that Chandrapur is situated at 20° N latitude and Belo Horizonte is situated at 20° S latitude. We see in Figure 2.2 that as we move away from the equator, the size of the parallels of latitude decreases.

Do you know?
By measuring the angle of the Pole Star from your place, you can know the latitude of your place. 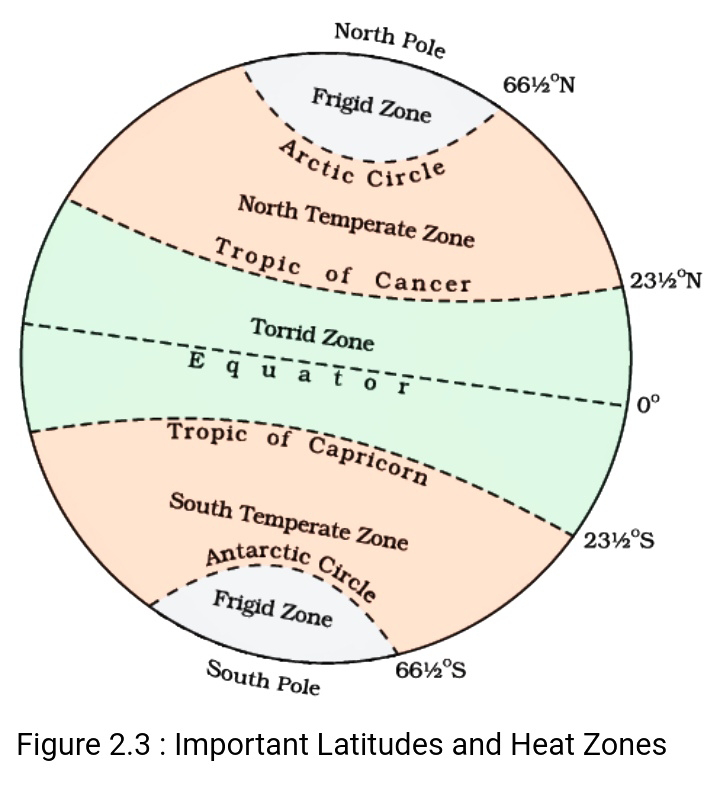 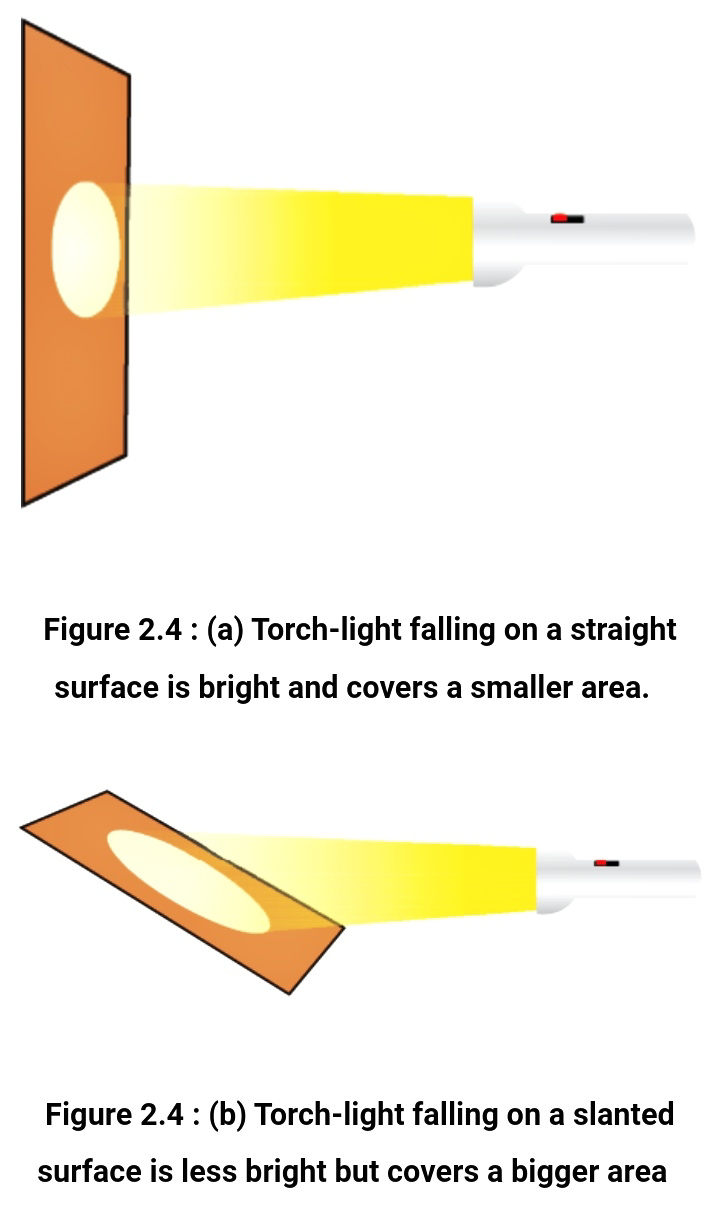 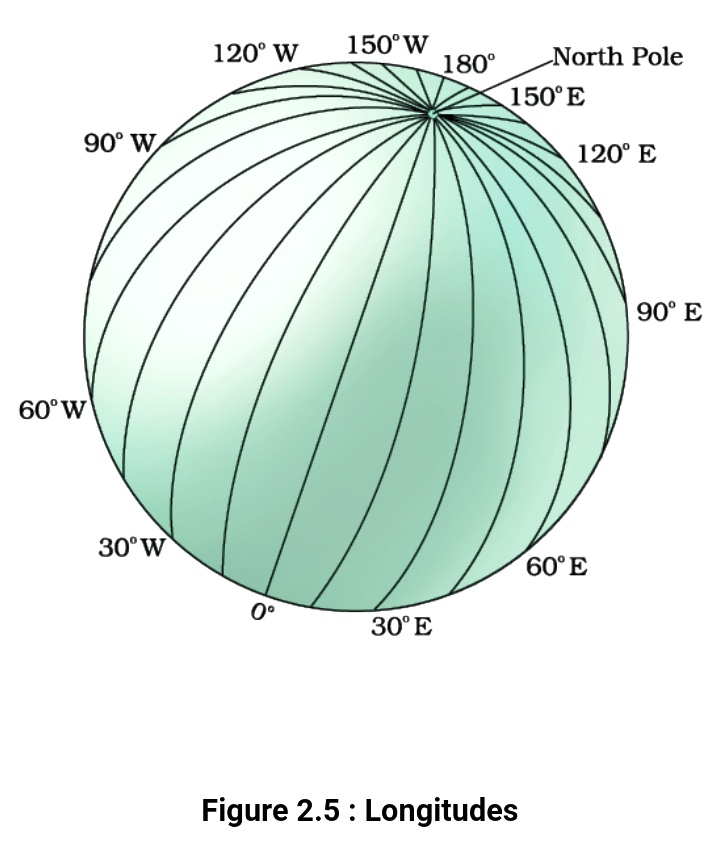 What are Longitudes?
To fix the position of a place, it is necessary to know something more than the latitude of that place. You can see, for example, that Tonga Islands (in the Pacific Ocean) and Mauritius Islands (in the Indian Ocean) are situated on the same latitude (i.e., 20° S). Now, in order to locate them precisely, we must find out how far east or west these places are from a given line of reference running from the North Pole to the South Pole. These lines of references are called the meridians of longitude, and the distances between them are measured in ‘degrees of longitude.’ Each degree is further divided into minutes, and minutes into seconds. They are semi-circles and the distance between them decreases steadily polewards until it becomes zero at the poles, where all the meridians meet.
Unlike parallels of latitude, all meridians are of equal length. Thus, it was difficult to number the meridians. Hence, all countries decided that the count should begin from the meridian which passed through Greenwich, where the British Royal Observatory is located. This meridian is called the Prime Meridian. Its value is 0° longitude and from it we count 180° eastward as well as 180° westward. The Prime Meridian and 180° meridian divide the earth into two equal halves, the Eastern Hemisphere and the Western Hemisphere. Therefore, the longitude of a place is followed by the letter E for the east and W for the west. It is, however, interesting to note that 180° East and 180° West meridians are on the same line.
Now look at the grid of the parallels of latitude and meridians of longitude on the globe (Figure 2.6). You can locate any point on the globe very easily if you know its latitude and longitude. For example, Dhubri in Assam is situated at 26° N latitude and 90° E longitude. Find out the point where these two lines cut each other. That point will be the location of Dhubri.
To understand this clearly draw equidistant vertical and horizontal lines on a paper (Figure 2.7). Label the vertical rows with numbers and horizontal rows with letters, draw some small circles randomly on points where these horizontal and vertical lines intersect each other. Name these small circles as a, b, c, d and e.
Let vertical lines represent East Longitudes and horizontal lines as North Latitudes.
Now you will see that circle ‘a’ is located on B° N latitude and 1° E longitude.
Find out the location of other circles. 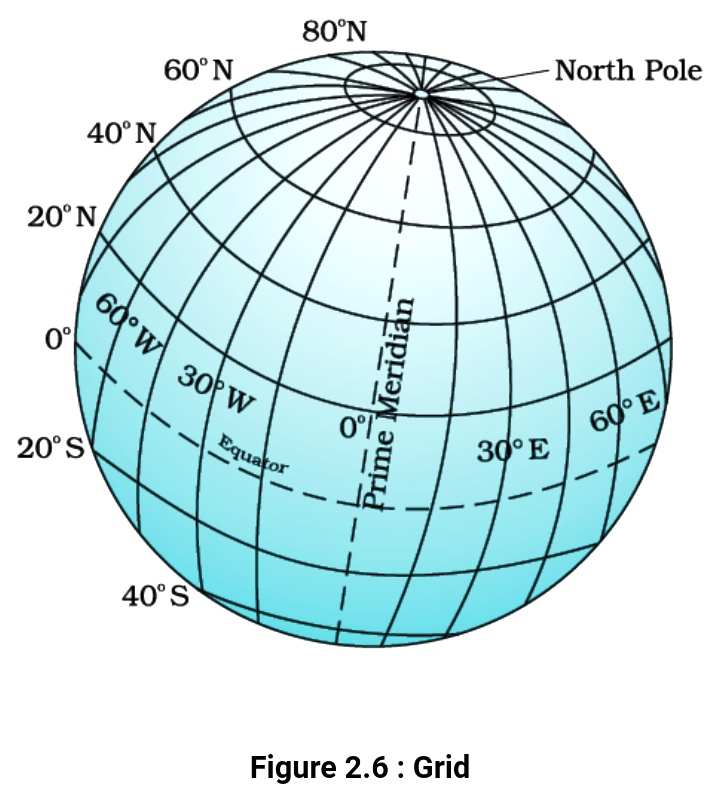 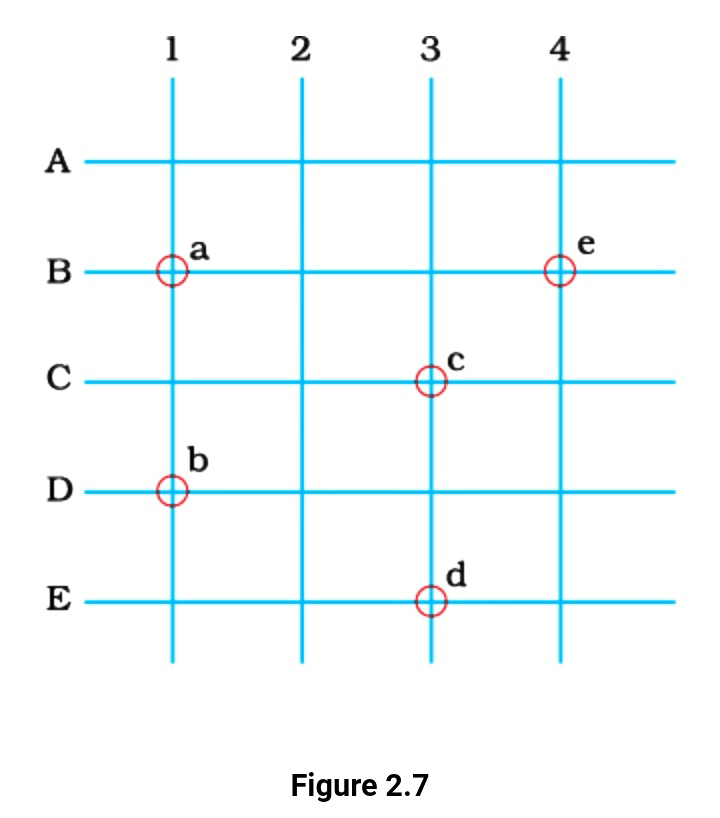 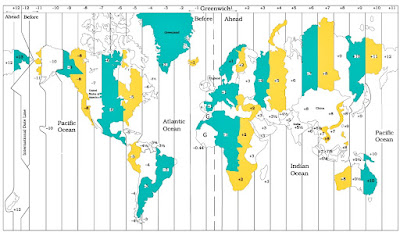 Figure 2.8 : Time zones of the World
Longitude and Time
The best means of measuring time is by the movement of the earth, the moon and the planets. The sun regularly rises and sets every day, and naturally, it is the best time-keeper throughout the world. Local time can be reckoned by the shadow cast by the sun, which is the shortest at noon and longest at sunrise and sunset.
When the Prime Meridian of Greenwich has the sun at the highest point in the sky, all the places along this meridian will have mid-day or noon.
As the earth rotates from west to east, those places east of Greenwich will be ahead of Greenwich time and those to the west will be behind it (Figure 2.8). The rate of difference can be calculated as follows. The earth rotates 360° in about 24 hours, which means 15° an hour or 1° in four minutes. Thus, when it is 12 noon at Greenwich, the time at 15° east of Greenwich will be 15 × 4 = 60 minutes, i.e., 1 hour ahead of Greenwich time, which means 1 p.m. But at 15° west of Greenwich, the time will be behind Greenwich time by one hour, i.e., it will be 11.00 a.m. Similarly, at 180°, it will be midnight when it is 12 noon at Greenwich.
At any place a watch can be adjusted to read 12 o’clock when the sun is at the highest point in the sky, i.e., when it is mid-day. The time shown by such a watch will give the local time for that place. You can see that all the places on a given meridian of longitude have the same local time.
Why Do We Have Standard Time?
The local time of places which are on different meridians are bound to differ. For example, it will be difficult to prepare a time-table for trains which cross several longitudes. In India, for instance, there will be a difference of about 1 hour and 45 minutes in the local times of Dwarka in Gujarat and Dibrugarh in Assam. It is, therefore, necessary to adopt the local time of some central meridian of a country as the standard time for the country. In India, the longitude of 82½° E (82° 30’E) is treated as the standard meridian. The local time at this meridian is taken as the standard time for the whole country. It is known as the Indian Standard Time (IST). 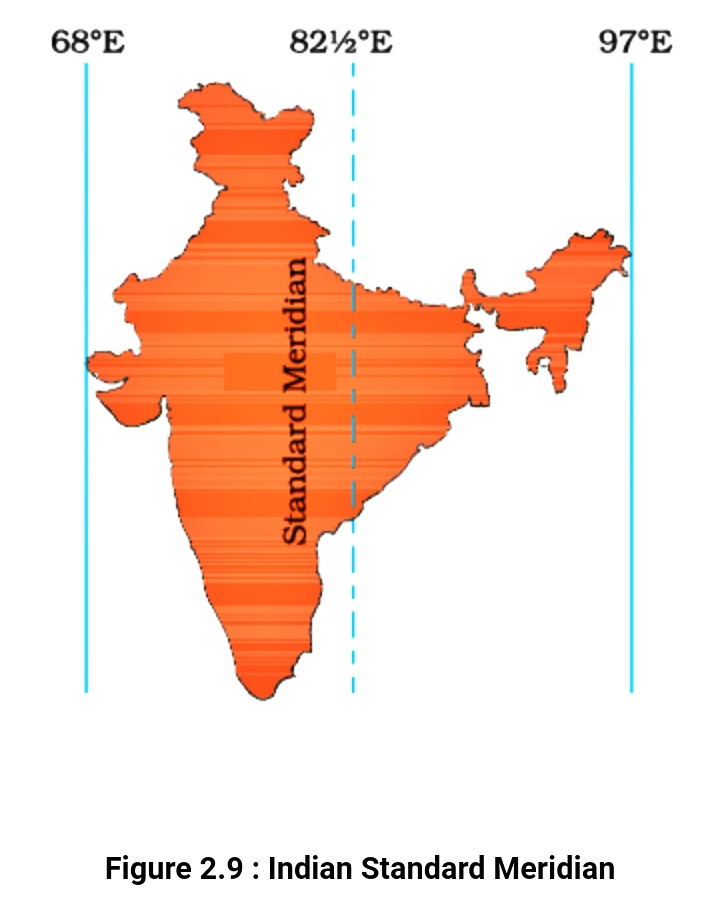 Kabeer lives in a small town near Bhopal. He tells his friend Alok that they will not be able to sleep tonight. A day and night cricket match between India and England had started at 2 p.m. in London. This means that the match would begin at 7.30 p.m. in India and finish well into the night. Do you know what is the time difference between India and England?
India located east of Greenwich at 82°30’E is 5 hours and 30 minutes ahead of GMT. So it will be 7:30 p.m. in India when it is 2:00 p.m. noon in London.
Some countries have a great longitudinal extent and so they have adopted more than one standard time. For example, in Russia, there are as many as eleven standard times. The earth has been divided into twenty-four time zones of one hour each. Each zone thus covers 15° of longitude.