You must have seen some of the landform features as shown in the Figure 6.1 below. You will notice that the surface of the earth is not the same everywhere. The earth has an infinite variety of landforms. Some parts of the lithosphere may be rugged and some flat.

These landforms are a result of two processes. You will be amazed to know that the ground you are standing on is slowly moving. Within the earth, a continuous movement is taking place. The first, or the internal process leads to the upliftment and sinking of the earth’s surface at several places.

A hill is a land surface that rises higher than the surrounding area. Generally, a steep hill with an elevation of more than 600 metres is termed as a mountain. Name some mountains with a height of more than 8,000 metres. 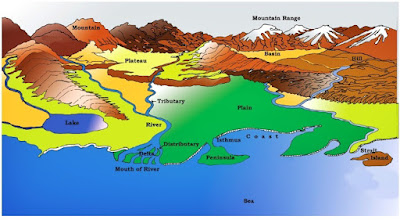 The second, or the external process is the continuous wearing down and rebuilding of the land surface. The wearing away of the earth’s surface is called erosion. The surface is being lowered by the process of erosion and rebuilt by the process of deposition. These two processes are carried out by running water, ice and wind. Broadly, we can group different landforms depending on elevation and slope as mountains, plateaus and plains.

A mountain is any natural elevation of the earth surface. The mountains may have a small summit and a broad base. It is considerably higher than the surrounding area. Some mountains are even higher than the clouds. As you go higher, the climate becomes colder.

In some mountains, there are permanently frozen rivers of ice. They are called glaciers. There are some mountains you cannot see as they are under the sea. Because of harsh climate, less people live in the mountain areas. Since the slopes are steep, less land is available for farming.

Making of a Mountain :

1. All you require is a pile of paper.

2. Put the papers on your table.

3. Push the papers from both sides by your hands.

4. The sheet will be folded and rise into a peak.

5. You have made a mountain!

In the same process our Himalayas and the Alps were formed! 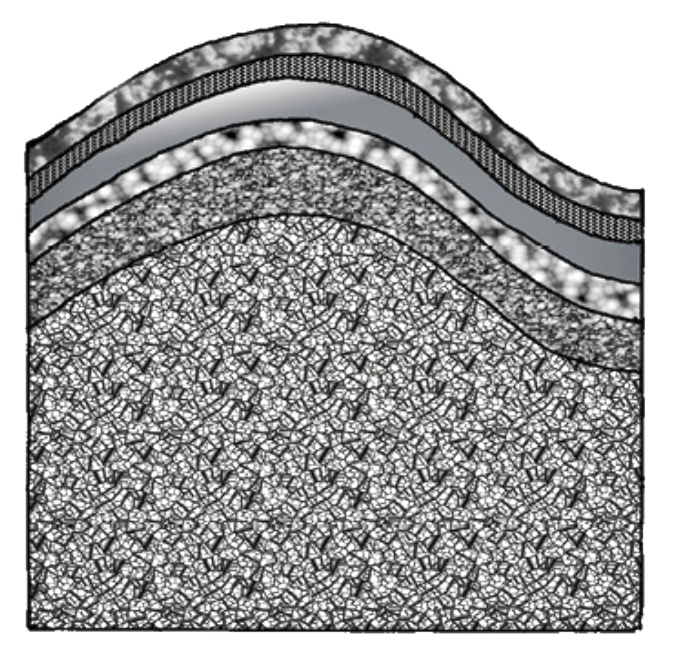 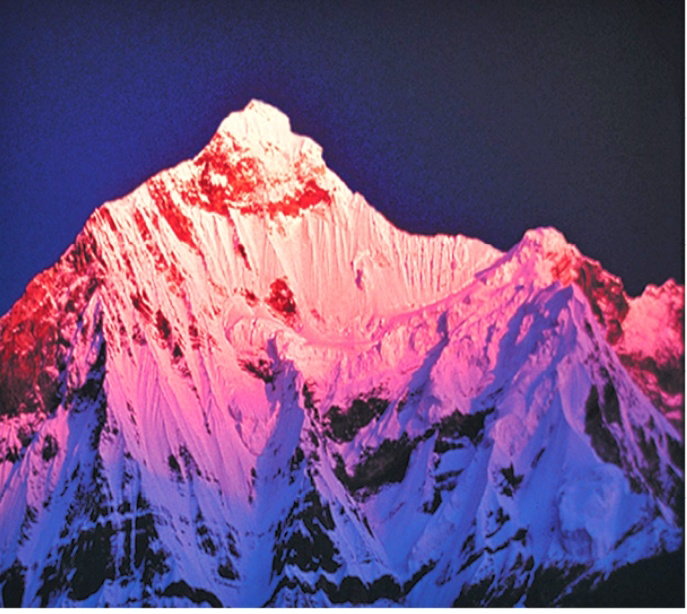 Mountains may be arranged in a line known as range. Many mountain systems consist of a series of parallel ranges extending over hundreds of kilometres. The Himalayas, the Alps and the Andes are mountain ranges of Asia, Europe and South America, respectively (Figure 5.1). Mountains vary in their heights and shape.

There are three types of mountains- Fold Mountains, Block Mountains and the Volcanic Mountains. The Himalayan Mountains and the Alps are young fold mountains with rugged relief and high conical peaks. The Aravali range in India is one of the oldest fold mountain systems in the world. The range has considerably worn down due to the processes of erosion. The Appalachians in North America and the Ural mountains in Russia (Figure 5.1) have rounded features and low elevation. They are very old fold mountains.

Mauna Kea (Hawaii) in the Pacific Ocean is an undersea mountain. It is higher than Mount Everest being 10,205 metres high.

Block Mountains are created when large areas are broken and displaced vertically. The uplifted blocks are termed as horsts and the lowered blocks are called graben. The Rhine valley and the Vosges mountain in Europe are examples of such mountain systems. Locate them on the world map in the atlas and find out some more examples of this type of landforms. 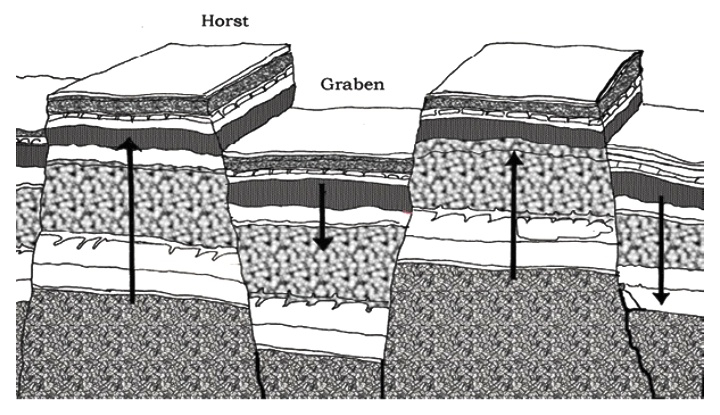 Volcanic mountains are formed due to volcanic activity. Mt.Kilimanjaro in Africa and Mt.Fujiyama in Japan are examples of such mountains.

Mountains are very useful. The mountains are a storehouse of water. Many rivers have their source in the glaciers in the mountains. Reservoirs are made and the water is harnessed for the use of people. Water from the mountains is also used for irrigation and generation of hydro-electricity. The river valleys and terraces are ideal for cultivation of crops. Mountains have a rich variety of flora and fauna. The forests provide fuel, fodder, shelter and other products like gum, raisins, etc. Mountains provide an idyllic site for tourists. They visit the mountains for their scenic beauty. Several sports like paragliding, hang gliding, river rafting and skiing are popular in the mountains. Can you name some places in the Himalayas associated with these sports? 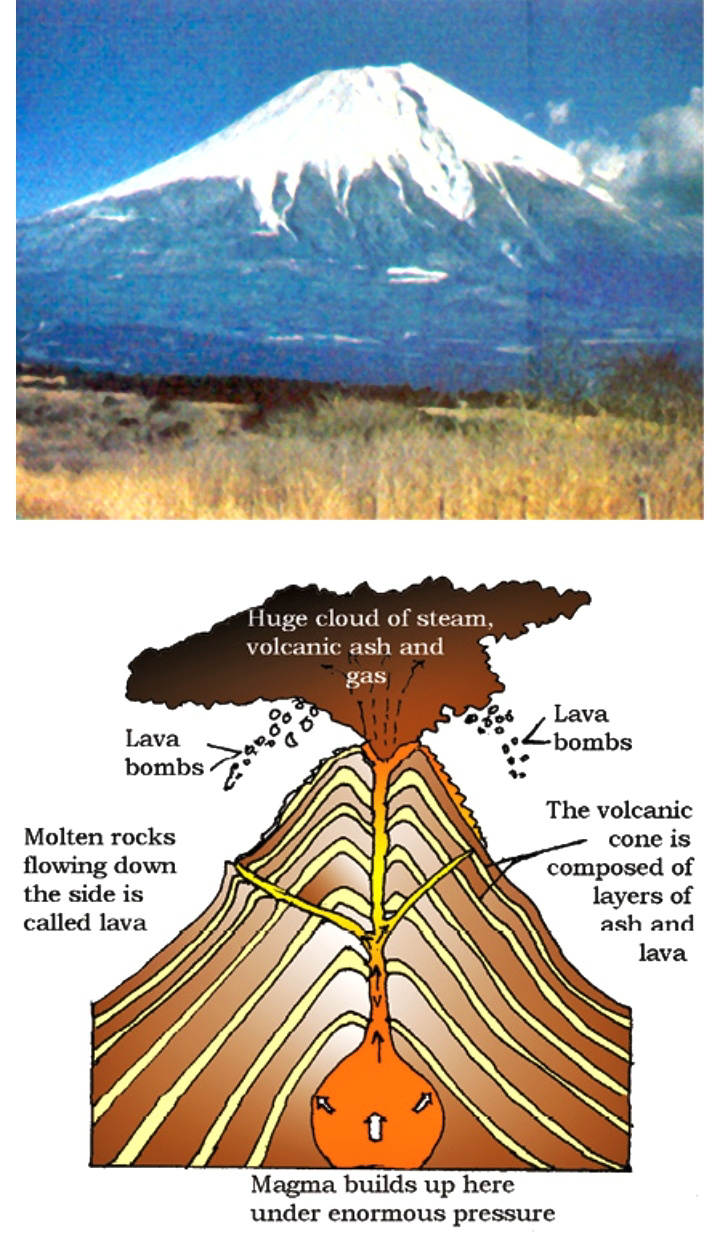 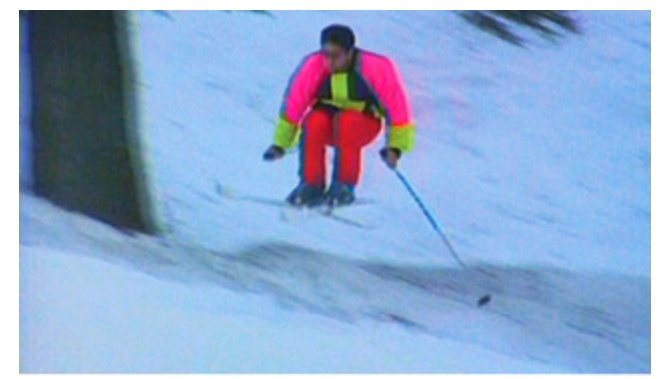 Can you name this sport? 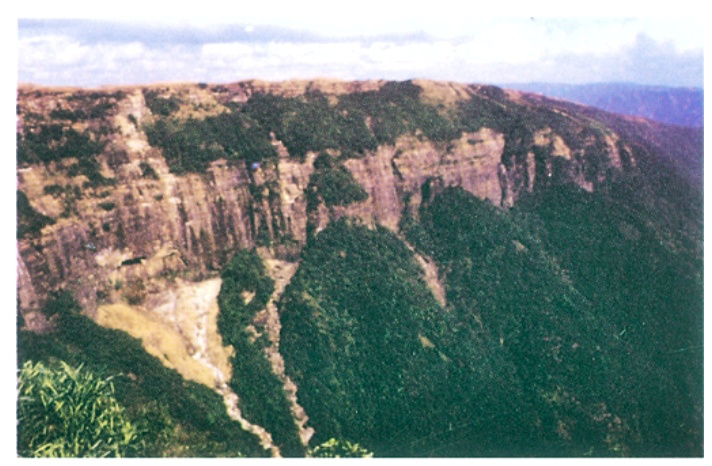 A plateau is an elevated flat land. It is a flat-topped table land standing above the surrounding area. A plateau may have one or more sides with steep slopes. The height of plateaus often varies from few hundred metres to several thousand metres. Plateaus, like mountains may be young or old. The Deccan plateau in India is one of the oldest plateaus. The East African Plateau in Kenya, Tanzania and Uganda and the Western plateau of Australia are other examples. The Tibet plateau (Figure 5.1, p.31) is the highest plateau in the world with a height of 4,000 to 6,000 metres above the mean sea level.

Plateaus are very useful because they are rich in mineral deposits. As a result, many of the mining areas in the world are located in the plateau areas. The African plateau is famous for gold and diamond mining. In India huge reserves of iron, coal and manganese are found in the Chhotanagpur plateau.

In the plateau areas, there may be several waterfalls as the river falls from a great height. In India, the Hundru falls in the Chhotanagpur plateau on the river Subarnarekha and the Jog falls in Karnataka are examples of such waterfalls. The lava plateaus are rich in black soil that are fertile and good for cultivation. Many plateaus have scenic spots and are of great attraction to tourists.

Plains are large stretches of flat land. They are, generally, not more than 200 metres above mean sea level. Some plains are extremely level. Others may be slightly rolling and undulating. Most of the plains are formed by rivers and their tributaries. The rivers flow down the slopes of mountains and erode them. They carry forward the eroded material. Then they deposit their load consisting of stones, sand and silt along their courses and in their valleys. It is from these deposits that plains are formed.

Landforms and the People

Humans have been living on different kinds of landforms in different ways. Life is difficult in mountainous areas. Plains provide much better conditions. It is easy to grow crops, build a house or a road in a plain than a mountain. Can you point out some differences in the ways people live on different kinds of landforms? Sometimes, natural calamities such as earthquakes, volcanic eruption, storms and floods cause widespread destruction. Huge loss of life and property takes place. By creative awareness about such incidences we may lower the risks.

You may find out from your own surroundings in how many ways we use the land and water. Quite often we use the land in a wasteful manner, for example constructing houses on a fertile land. Similarly we throw garbage on land or in water making them dirty. We should avoid using such important gifts of nature in a careless manner. The available land is not only for our use. It is our duty to leave the earth a better place for future generations as well. 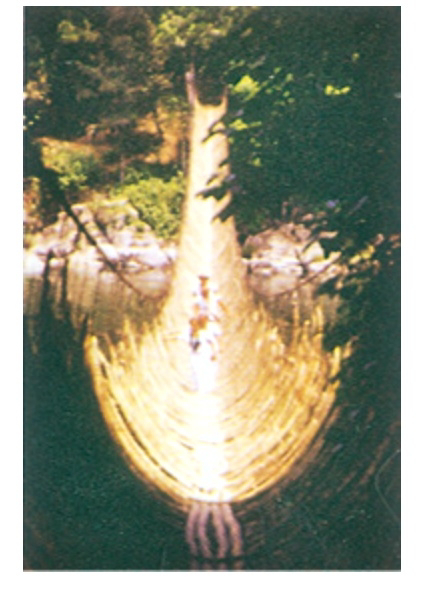 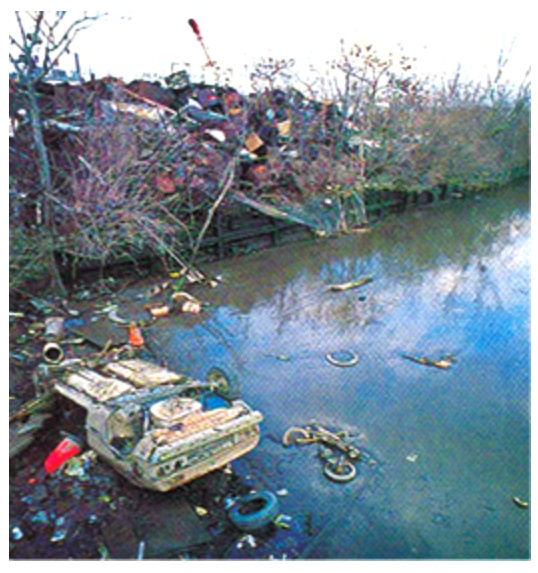 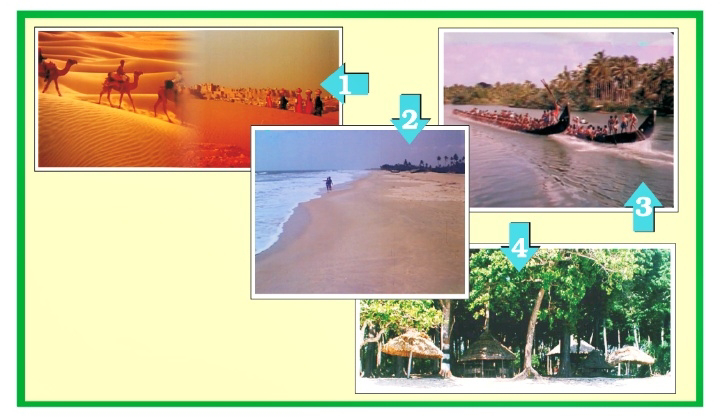 1. Look carefully at photograph nos. 1-10. Write one sentence about each of the photograph.

2. Name the landform features shown in the photograph nos. 1,2 and 7.

3. What appears to be the main use of this land? (Photograph no. 9) 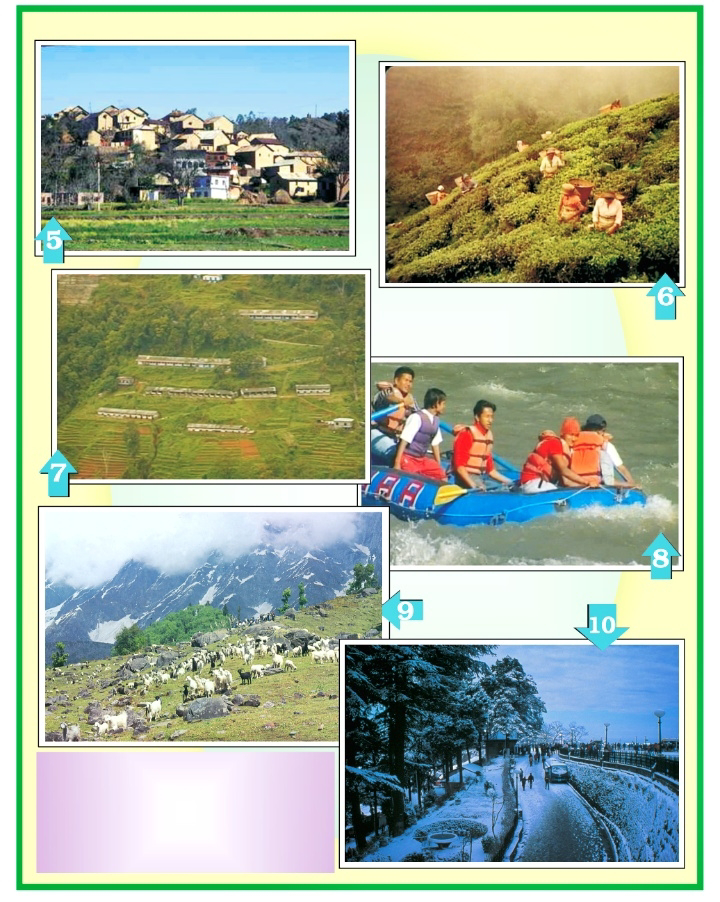 7. Name two means of transport shown in photograph nos. 1 and 10.