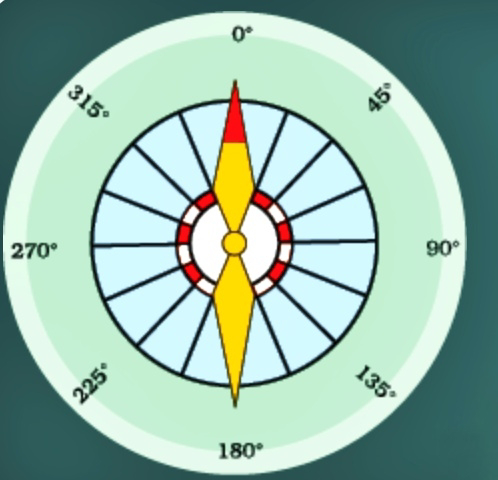 You have learnt in the previous chapter about the advantages of a globe. However, globe has limitations as well. A globe can be useful when we want to study the earth as a whole. But, when we want to study only a part of the earth, as about our country, states, districts, towns and villages, it is of little help. In such a situation we use maps. A map is a representation or a drawing of the earth’s surface or a part of it drawn on a flat surface according to a scale. But it is impossible to flatten a round shape completely.
We find that maps are useful to us for various purposes. One map shows a small area and a few facts. Another map may contain as many facts as a big book. When many maps are put together we get an Atlas. Atlases are of various sizes, measurements drawn on different scales. Maps provide more information than a globe. They are of different types. Some of them are described below.
Physical Maps
Maps showing natural features of the earth such as mountains, plateaus, plains, rivers, oceans etc. are called physical or relief maps.
Political Maps
Maps showing cities, towns and villages, and different countries and states of the world with their boundaries are called political maps.
Thematic Maps
Some maps focus on specific information; such as road maps, rainfall maps, maps showing distribution of forests, industries etc. are known as thematic maps. Suitable titles are given on the basis of information provided in these maps.
There are three Components of Maps – distance, direction and symbol.
Distance
Maps are drawings, which reduce the entire world or a part of it to fit on a sheet of paper. Or we can say maps are drawn to reduced scales. But this reduction is done very carefully so that the distance between the places is real. It can only be possible when a small distance on paper represents a large distance on the ground. Therefore, a scale is chosen for this purpose. Scale is the ratio between the actual distance on the ground and the distance shown on the map. For example, the distance between your school and your home is 10 km. If you show this 10 km. distance by 2 cm on a map, it means, 1 cm on the map will show 5 km. on the ground. The scale of your drawing will be 1cm = 5 km. Thus, scale is very important in any map. If you know the scale, you will be able to calculate the distance between any two places on a map.
When large areas like continents or countries are to be shown on a paper, then we use a small scale. For example 5 cm. on the map shows 500 km. of the ground. It is called a small scale map.
When a small area like your village or town is to be shown on paper, then we use a large scale that is 5 cm. on the map shows 500 metres only on the ground. It is called a large scale map.
Large scale maps give more information than small scale maps.
Direction
Most maps contain an arrow marked with the letter ‘N’ at the upper right hand corner. This arrow shows the north direction. It is called the north line. When you know the north, you can find out other directions, for example east, west and south. There are four major directions, North, South, East and West {Figure 4.2 (a)}. They are called cardinal points. Other four intermediate directions are north-east (NE), south-east(SE), south-west (SW) and north-west (NW). We can locate any place more accurately with the help of these intermediate directions.
Find out the following directions from the Figure 4.1: (a) The direction of the Community Centre, the playground from Vikas’s house (b) the direction of school from shops.
We can find out the direction of a place with the help of a compass. It is an instrument used to find out main directions. Its magnetic needle always points towards north-south direction {Figure 4.2 (b)}. 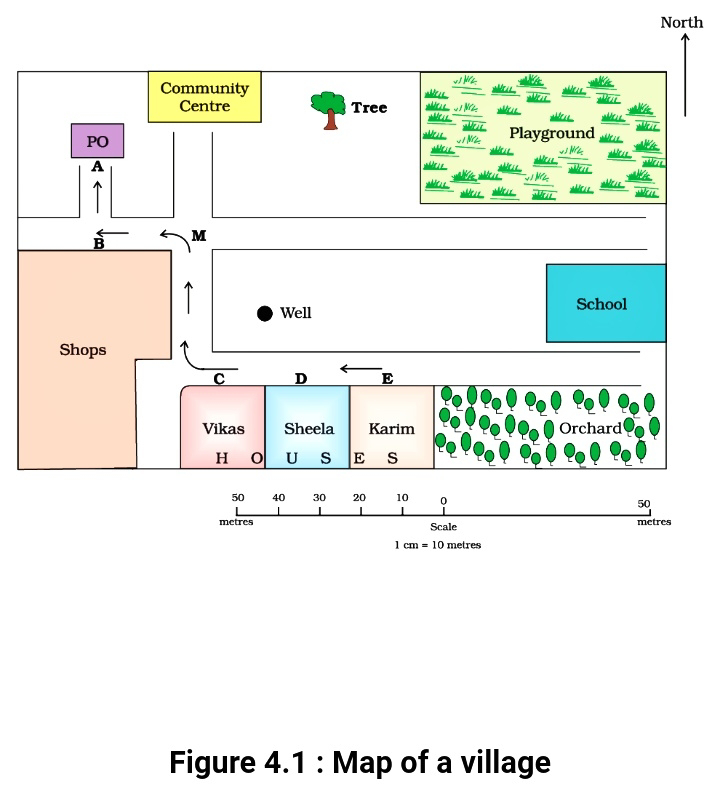 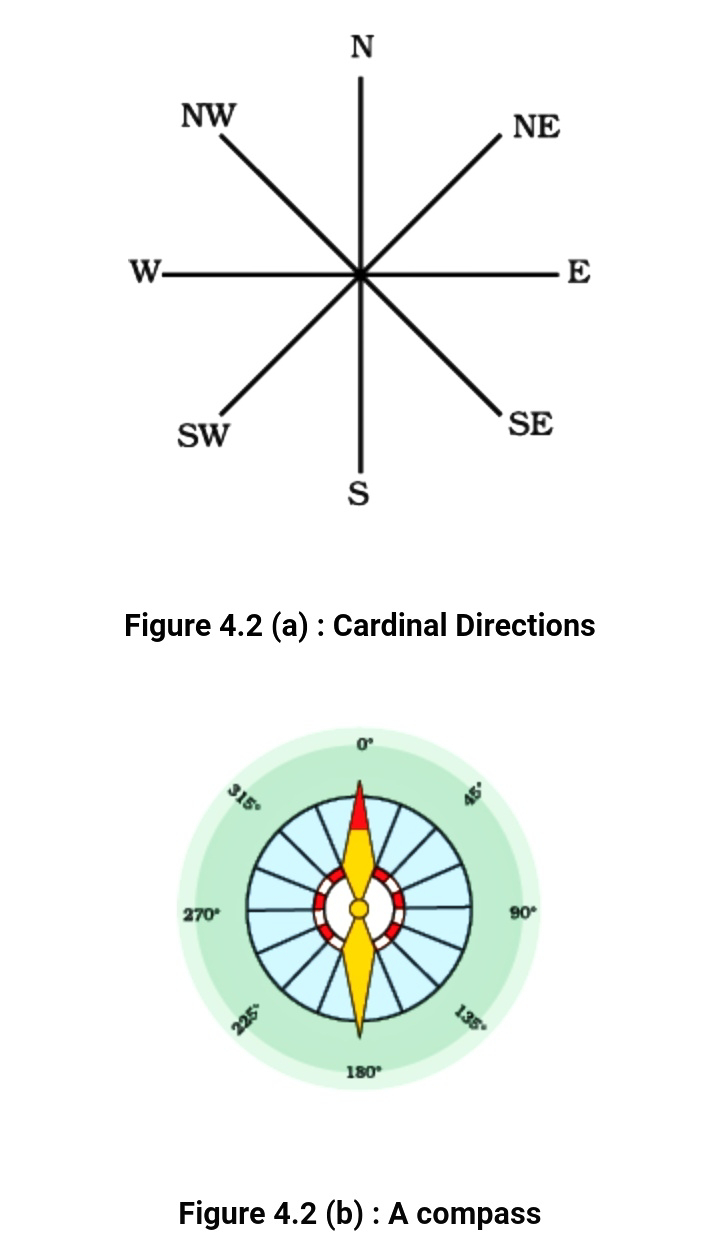 Symbols
It is the third important component of a map. It is not possible to draw on a map the actual shape and size of different features such as buildings, roads, bridges, trees, railway lines or a well. So, they are shown by using certain letters, shades, colours, pictures and lines These symbols give a lot of information in a limited space. With the use of these symbols, maps can be drawn easily and are simple to read. Even if you don’t know the language of an area and therefore cannot ask someone for directions, you can collect information from maps with the help of these symbols. Maps have a universal language that can be understood by all. There is an international agreement regarding the use of these symbols. These are called conventional symbols. Some of the conventional symbols are shown in the Figure 4.3. 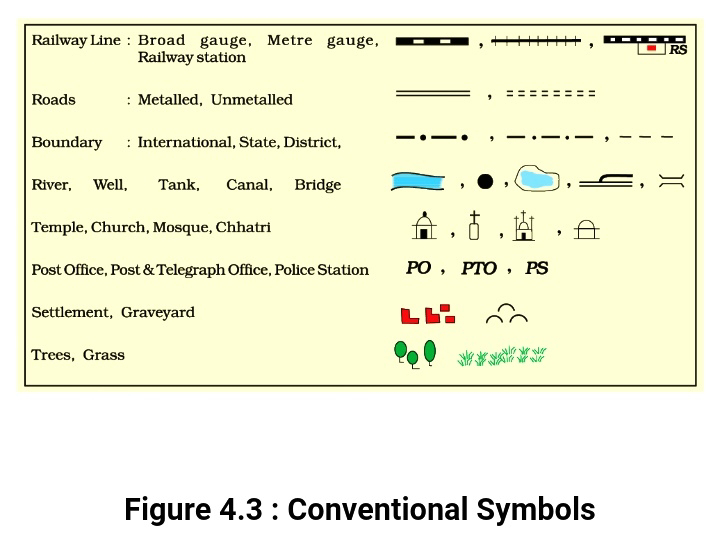 Various colours are used for the same purpose. For example, generally blue is used for showing water bodies, brown for mountain, yellow for plateau and green is used for plains. 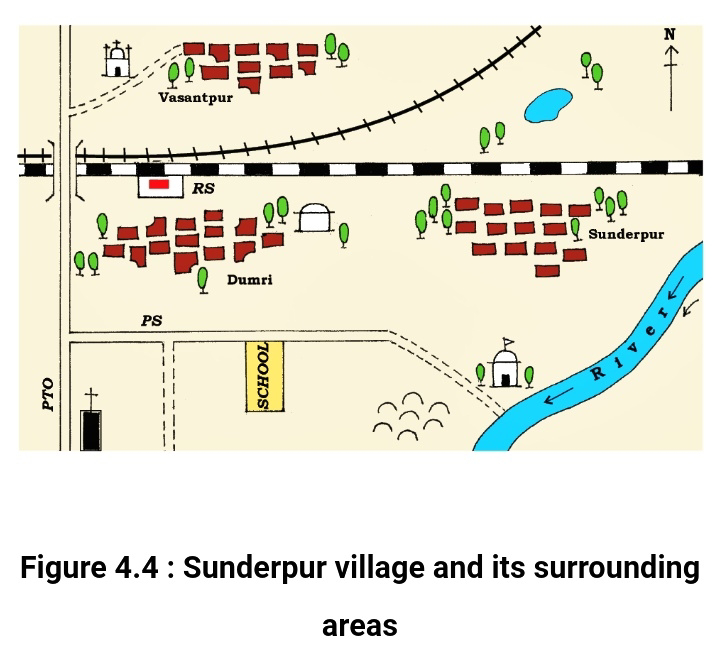 Sketch
A sketch is a drawing mainly based on memory and spot observation and not to scale. Sometimes a rough drawing is required of an area to tell where a particular place is located with respect to other places. Suppose, you want to go to your friend’s house, but you don’t know the way. Your friend may make a rough drawing to show the way to his house. Such a rough drawing is drawn without scale, and is called a sketch map.
Plan
A plan is a drawing of a small area on a large scale. A large-scale map gives lot of information, but there are certain things which we may sometimes want to know for example the length and breadth of a room, which can’t be shown in a map. At that time, we can refer drawings drawn to scale called a plan.