India is a country of vast geographical expanse. In the north, it is bound by the lofty Himalayas. The Arabian Sea in the west, the Bay of Bengal in the east and the Indian Ocean in the south, wash the shores of the Indian peninsula.

The peninsula is a piece of land that is surrounded by water on three sides (figure 6.1).

India has an area of about 3.28 million sq. km. The north-south extent from Kashmir to Kanyakumari is about 3,200 km. And the east-west extent from Arunachal Pradesh to Kuchchh is about 2,900 km. The lofty mountains, the Great Indian Desert, the Northern Plains, the uneven plateau surface and the coasts and islands present a diversity of landforms. There is a great variety in the climate, vegetation, wildlife as well as in the language and culture. In this diversity, we find unity that is reflected in traditions that bind us as one nation. India has a population of more than one hundred twenty crores since the year 2011. It is the second most populous country of the world after China.

Large countries which stretch extensively from east to west do not have a single Standard Time for the whole country. The USA and Canada have seven and six time zones respectively. Do you remember how many time zones are there in Russia?

India is located in the northern hemisphere. The Tropic of Cancer (23°30’N) passes almost halfway through the country (Figure 7.2). From south to north, main land of India extends between 8°4’N and 37°6’N latitudes. From west to east, India extends between 68°7’E and 97°25’E longitudes. If we divide the world into eastern and western hemispheres, which hemisphere would India belong to? Due to great longitudinal extent of about 29°, there could be a wide differences in local time of places located at two extreme points of India. As such, the difference between these two points would be of about two hours. As you have learnt earlier, the local time changes by four minutes for every one degree of longitude. The sun rises about two hours earlier in the east (Arunachal Pradesh) than in the west (Gujarat). You have already read earlier, why the local time of longitude of 82°30’E has been taken as the Indian Standard Time. This meridian or longitude is also termed as the Standard Meridian of India.

There are seven countries that share land boundaries with India. Find out names of these countries from the Figure 7.1. How many of these countries do not have access to any ocean or sea? Across the sea to the south, lie our island neighbours— Sri Lanka and Maldives. Sri Lanka is separated from India by the Palk Strait. 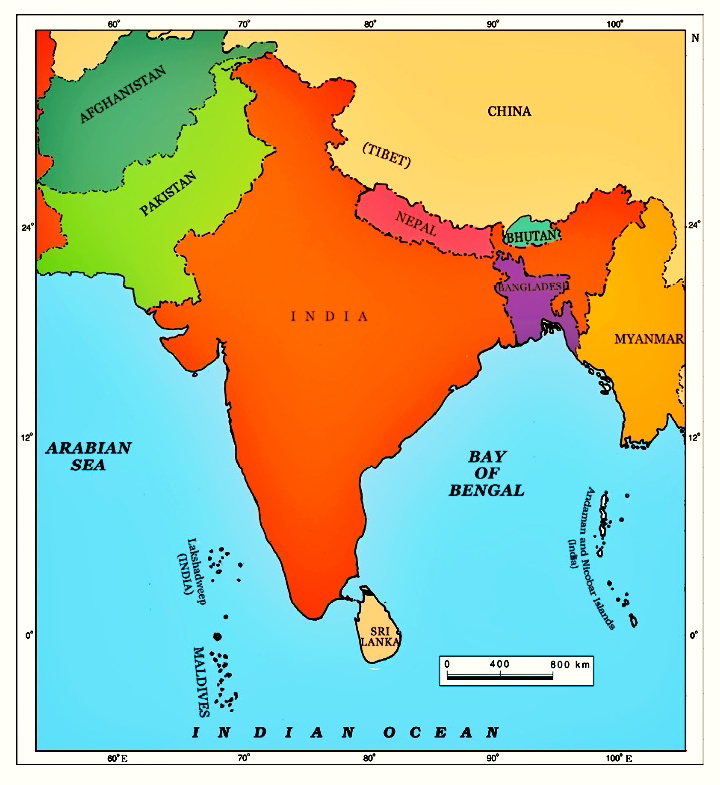 Figure 7.1 : India and its neighbouring countries

India is a vast country. For administrative purposes, the country is divided into 29 States and 9 Union Territories (Appendix-I). Delhi is the national capital. The states have been formed mainly on the basis of languages. 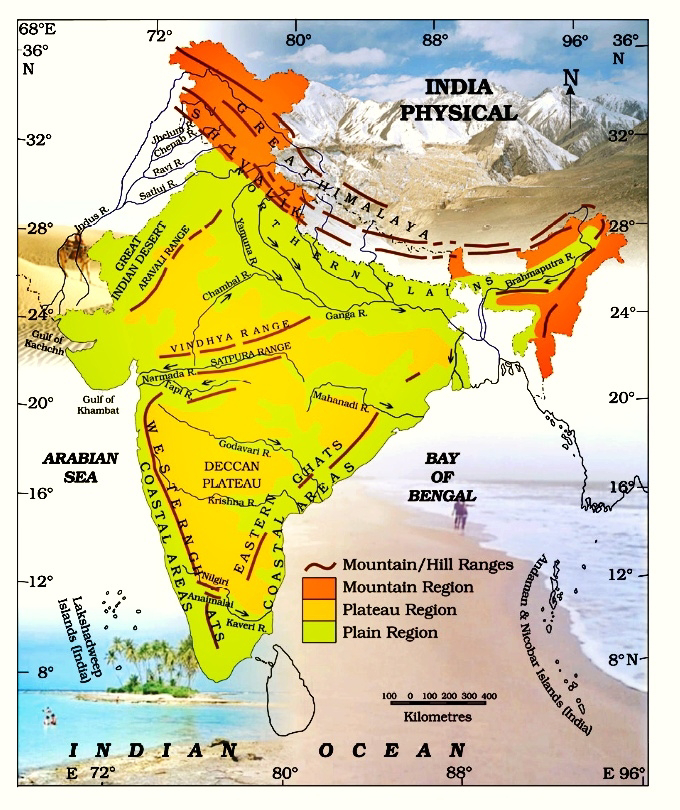 India is marked by a diversity of physical features such as mountains, plateaus, plains, coasts and islands. Standing as sentinels in the north are the lofty snow-capped Himalayas. Him+alaya mean ‘the abode of snow’. The Himalayan mountains are divided into three main parallel ranges. The northernmost is the Great Himalaya or Himadri. The world’s highest peaks are located in this range. Middle Himalaya or Himachal lies to the south of Himadri. Many popular hill stations are situated here. Find out the names of five hill stations. The Shiwalik is the southernmost range.

The Northern Indian plains lie to the south of the Himalayas. They are generally level and flat. These are formed by the alluvial deposits laid down by the rivers– the Indus, the Ganga, the Brahmaputra and their tributaries. These river plains provide fertile land for cultivation. That is the reason for high concentration of population in these plains.

Alluvial deposits : These are very fine soils, brought by rivers and deposited in the river basins.

Tributary : A river or stream which contributes its water to a main river by discharging it into main river from either side (Figure 6.1).

In the western part of India lies the Great Indian desert. It is a dry, hot and sandy stretch of land. It has very little vegetation.

To the south of northern plains lies the Peninsular plateau. It is triangular in shape. The relief is highly uneven. This is a region with numerous hill ranges and valleys. Aravali hills, one of the oldest ranges of the world, border it on the north-west side. The Vindhyas and the Satpuras are the important ranges. The rivers Narmada and Tapi flow through these ranges. These are west-flowing rivers that drain into the Arabian Sea. The Western Ghats or Sahyadris border the plateau in the west and the Eastern Ghats provide the eastern boundary. While the Western Ghats are almost continuous, the Eastern Ghats are broken and uneven (Figure 7.3). The plateau is rich in minerals like coal and iron-ore. 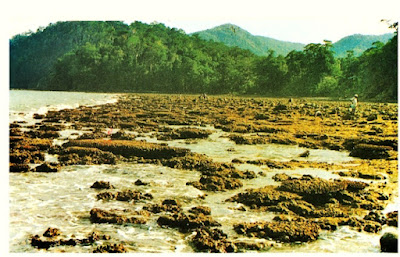 Corals are skeletons of tiny marine animals called Polyps. When the living polyps die, their skeletons are left. Other poplyps grow on top of the hard skeleton which grows higher and higher, thus forming the coral islands. Figure 7.4 shows Coral islands.

Two groups of islands also form part of India. Lakshadweep Islands are located in the Arabian Sea. These are coral islands located off the coast of Kerala. The Andaman and the Nicobar Islands lie to the southeast of the Indian mainland in the Bay of Bengal. Do you know which group of islands were affected by the Tsunami in 2004? Find out through newspaper reports and by speaking to people how in different ways people faced this challenge when Tsunami struck the Indian coast. Tsunami is a huge sea wave generated due to an earthquake on the sea floor.