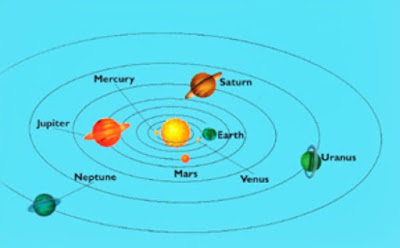 THE EARTH IN THE SOLAR SYSTEM

How wonderful it is to watch the sky after sunset! One would first notice one or two bright dots shining in the sky. Soon you would see the number increasing. You cannot count them any more. The whole sky is filled with tiny shining objects – some are bright, others dim. It seems as if the sky is studded with diamonds. They all appear to be twinkling. But if you look at them carefully you will notice that some of them do not twinkle as others do. They simply glow without any flicker just as the moon shines.

Along with these bright objects, you may also see the moon on most of the days. It may, however, appear at different times, in different shapes and at different positions. You can see the full moon only once in about a month’s time. It is Full moon night or Poornima. A fortnight later, you cannot see it at all. It is a New moon night or Amavasya. On this day, you can watch the night sky best, provided it is a clear night.
Do you wonder why can’t we see the moon and all those bright tiny objects during day time? It is because the very bright light of the sun does not allow us to see all these bright objects of the night sky.
The sun, the moon and all those objects shining in the night sky are called celestial bodies.
Some celestial bodies are very big and hot. They are made up of gases. They have their own heat and light, which they emit in large amounts. These celestial bodies are called stars. The sun is a star.
Countless twinkling stars in the night sky are similar to the sun. But we do not feel their heat or light, and they look so tiny because they are very very far from us. 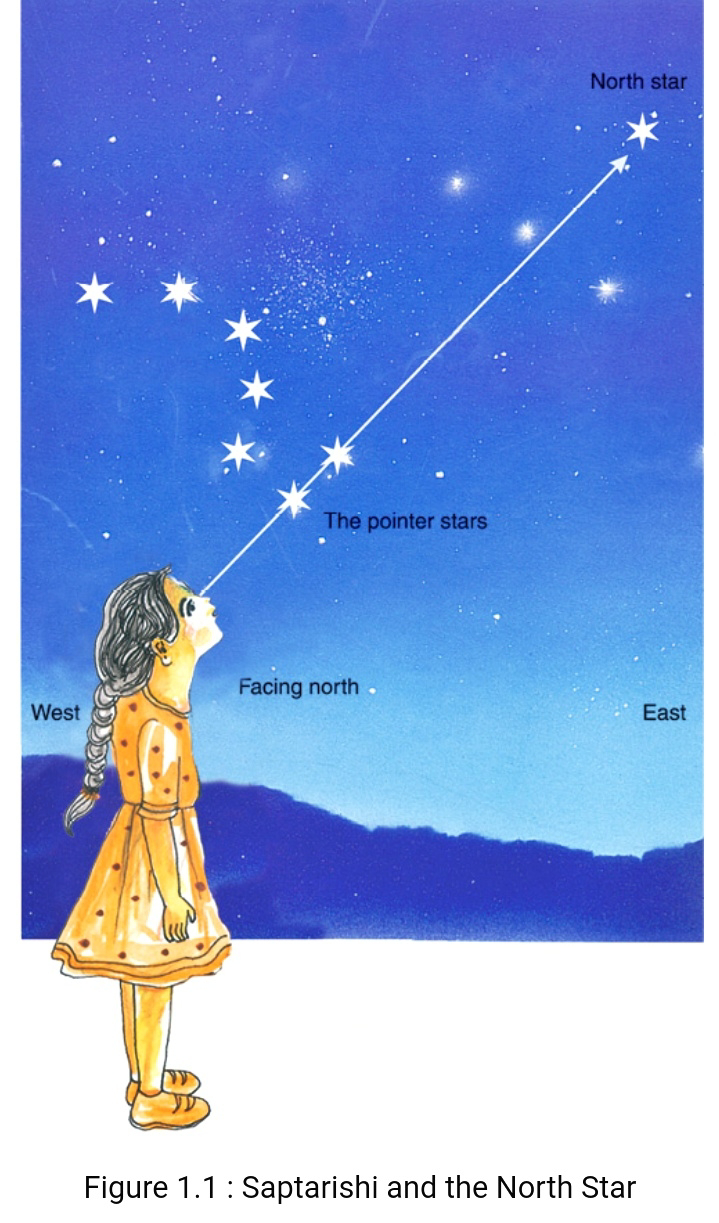 You must have noticed that all objects look smaller when seen from a distance. How small an aeroplane looks when it is flying at a great height!

While watching the night sky, you may notice various patterns formed by different groups of stars. These are called constellations. Ursa Major or Big Bear is one such constellation. One of the most easily recognisable constellation is the Saptarishi (Sapta-seven, rishi-sages). It is a group of seven stars (Figure 1.1) that forms a part of Ursa Major Constellation. Ask someone elder in your family or neighbourhood to show you more stars, planets and constellations in the sky.
In ancient times, people used to determine directions during the night with the help of stars. The North star indicates the north direction. It is also called the Pole Star. It always remains in the same position in the sky. We can locate the position of the PoleStar with the help of the Saptarishi. Look at Figure 1.1. You will notice that, if an imaginary line is drawn joining the pointer stars and extended further, it will point to the Pole Star.
Some celestial bodies do not have their own heat and light. They are lit by the light of the stars. Such bodies are called planets. The word ‘planet’ comes from the Greek word “Planetai” which means ‘wanderers’. The earth on which we live is a planet. It gets all its heat and light from the sun, which is our nearest star. If we look at the earth from a great distance, say the moon, it will appear to be shining just as the moon.
The moon that we see in the sky is a satellite. It is a companion of our earth and moves round it. Like our earth, there are seven other planets that get heat and light from the sun. Some of them have their moons too.
Facts
Jupiter, Saturn and Uranus have rings around them. These are belts of small debris. These rings may be seen from the earth with the help of powerful telescopes.

The sun, eight planets, satellites and some other celestial bodies known as asteroids and meteoroids form the solar system. We often call it a solar family, with the sun as its Head. 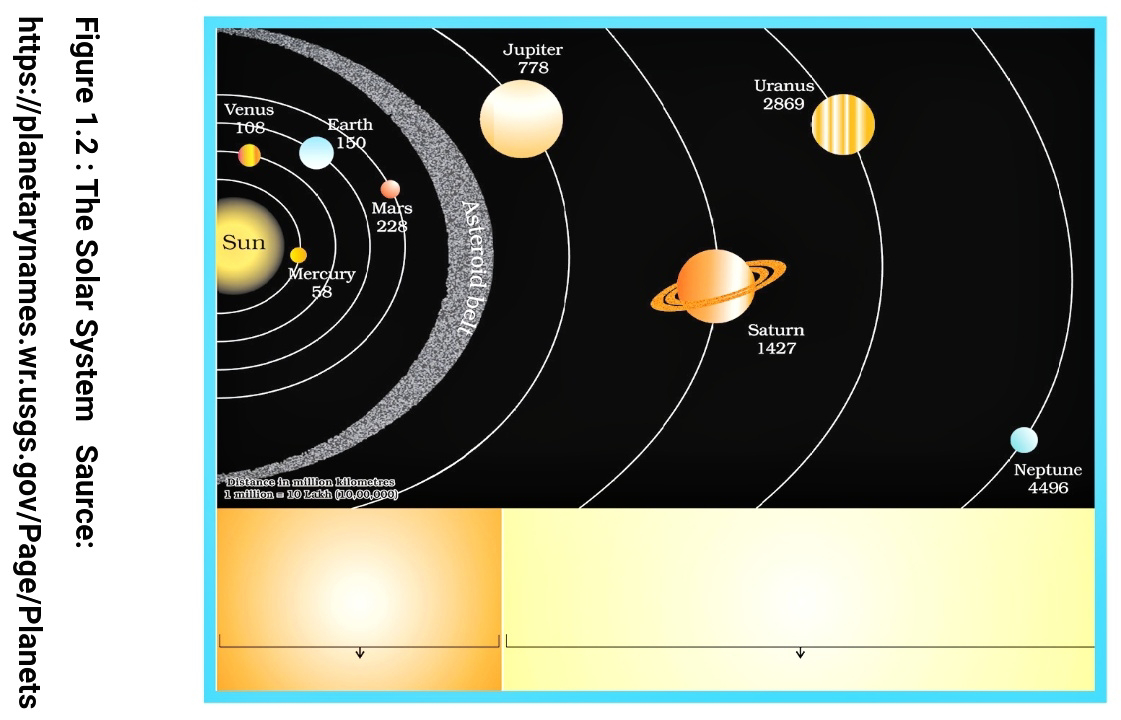 The sun is in the centre of the solar system. It is huge and made up of extremely hot gases. It provides the pulling force that binds the solar system. The sun is the ultimate source of heat and light for the solar system. But that tremendous heat is not felt so much by us because despite being our nearest star, it is far away from us. The sun is about 150 million km away from the earth.
Do you know ?
‘Sol’ in Roman mythology is the ‘Sungod’. ‘Solar’ means ‘related to the sun’. The family of the sun is, therefore, called the solar system. Write down as many words using the word solar on your own as you can.

There are eight planets in our solar system. In order of their distance from the sun, they are: Mercury, Venus, Earth, Mars, Jupiter, Saturn, Uranus and Neptune.
All the eight planets of the solar system move around the sun in fixed paths. These paths are elongated. They are called orbits.Mercury is nearest to the sun. It takes only about 88 days to complete one round along its orbit. Venus is considered as ‘Earth’s-twin’ because its size and shape are very much similar to that of the earth.
Till recently (August 2006), Pluto was also considered a planet. However, in a meeting of the International Astronomical Union, a decision was taken that Pluto like other celestial objects (Ceres, 2003 UB313) discovered in recent past may be called ‘dwarf planets.”
Many words used in a language may have been taken from some other language. Geography, for example, is an English word. It has its origin in Greek, which relates to the description of the earth. It is made of two Greek words, ‘ge’ meaning’ ‘earth’ and ‘graphia’ meaning ‘writing’. Find out more about the earth.
Do you know?
Humans have always been fascinated gazing at the night sky. Those who study the celestial bodies and their movements are called astronomers. Aryabhatta was a famous astronomer of ancient India. He said that the moon and the planets shine due to reflected sunlight. Today, astronomers all over the world are busy exploring the universe.

The earth is the third nearest planet to the sun. In size, it is the fifth largest planet. It is slightly flattened at the poles. That is why, its shape is described as a Geoid. Geoid means an earth-like shape.
Conditions favourable to support life are probably found only on the earth. The earth is neither too hot nor too cold. It has water and air, which are very essential for our survival. The air has life-supporting gases like oxygen. Because of these reasons, the earth is a unique planet in the solar system.
From the outer space, the earth appears blue because its two-thirds surface is covered by water. It is, therefore, called a blue planet.
Do you know?
Light travels at the speed of about 300,000 km per second. Yet, even with this speed, the light of the sun takes about eight minutes to reach the earth.

Our earth has only one satellite, that is, the moon. Its diametre is only one-quarter that of the earth. It appears so big because it is nearer to our planet than other celestial bodies. It is about 3,84,400 km away from us. Now you can compare the distance of the earth from the sun and that from the moon.
The moon moves around the earth in about 27 days. It takes exactly the same time to complete one spin. As a result, only one side of the moon is visible to us on the earth.
The moon does not have conditions favourable for life. It has mountains, plains and depressions on its surface. These cast shadows on the moon’s surface. Look at the full moon and observe these shadows. 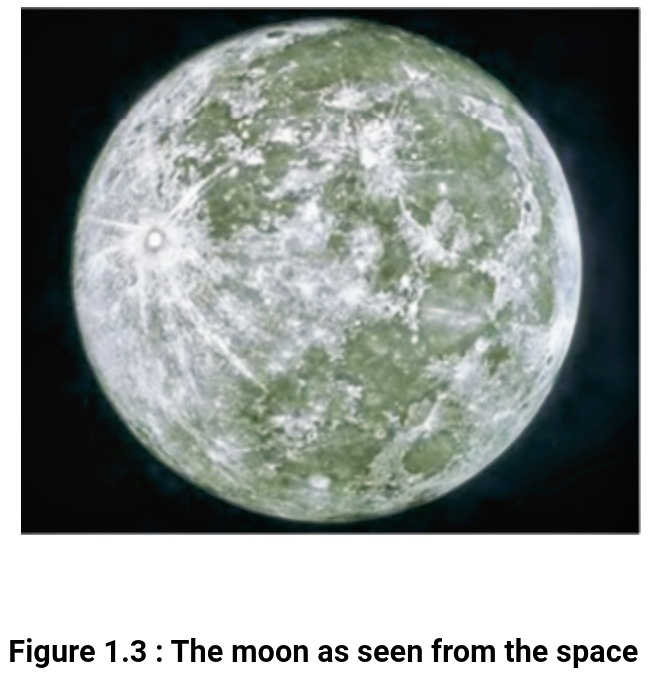 Apart from the stars, planets and satellites, there are numerous tiny bodies which also move around the sun. These bodies are called asteroids. They are found between the orbits of Mars and Jupiter (Figure 1.2). Scientists are of the view that asteroids are parts of a planet which exploded many years back. 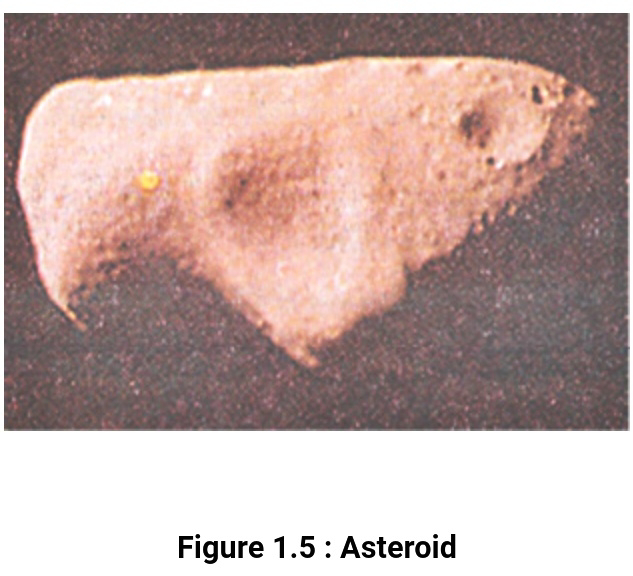 The small pieces of rocks which move around the sun are called meteoroids. Sometimes these meteoroids come near the earth and tend to drop upon it. During this process due to friction with the air they get heated up and burn. It causes a flash of light. Sometimes, a meteor without being completely burnt, falls on the earth and creates a hollow.
Do you see a whitish broad band, like a white glowing path across the sky on a clear starry night? It is a cluster of millions of stars. This band is the Milky Way galaxy (Figure 1.6). Our solar system is a part of this galaxy. In ancient India, it was imagined to be a river of light flowing in the sky. Thus, it was named Akash Ganga. A galaxy is a huge system of billions of stars, and clouds of dust and gases. There are millions of such galaxies that make the Universe. It is difficult to imagine how big the universe is. Scientists are still trying to find out more and more about it. We are not certain about its size but we know that all of us – you and I belong to this universe. 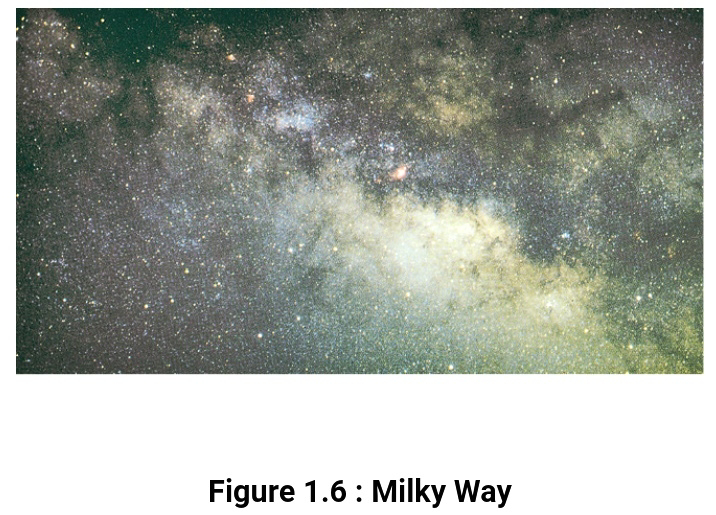