In its basic form a semiconductor diode is formed from a piece of silicon by making one end P type and the other end N type. This means that both ends have different characteristics. One end has an excess of electrons whilst the other has an excess of holes. Where the two areas meet the electrons fill the holes and there are no free holes or electrons. This means that there are no available charge carries in this region. In view of the fact that this area is depleted of charge carriers it is known as the depletion region.

The semiconductor diode PN junction with no bias applied

Even though the depletion region is very thin, often only few thousandths of a millimetre, current cannot flow in the normal way. Different effects are noticed dependent upon the way in which the voltage is applied to the junction. If the voltage is applied such that the P type area becomes positive and the N type becomes negative, holes are attracted towards the negative voltage and are assisted to jump across the depletion layer. Similarly electrons move towards the positive voltage and jump the depletion layer. Even though the holes and electrons are moving in opposite directions, they carry opposite charges and as a result they represent a current flow in the same direction. 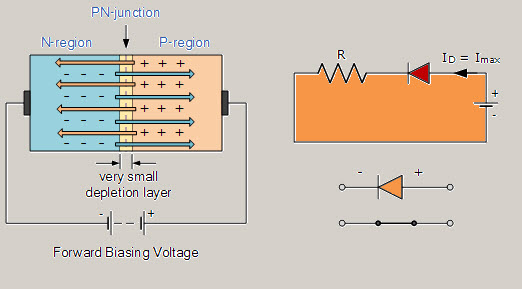 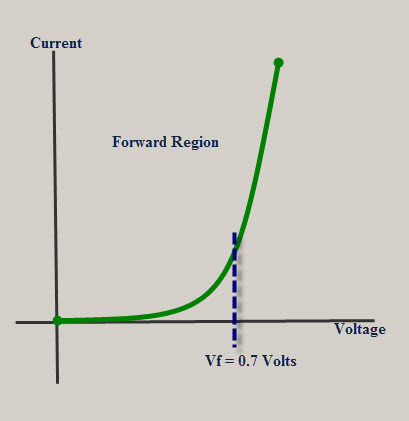 The characteristic of a diode PN junction

In the forward direction (forward biased) it can be seen that very little current flows until a certain voltage has been reached. This represents the work that is required to enable the charge carriers to cross the depletion layer. This voltage varies from one type of semiconductor to another. For germanium it is around 0.2 or 0.3 volts and for silicon it is about 0.6 volts. In fact it is possible to measure a voltage of about 0.6 volts across most small current diodes when they are forward biased. Power rectifier diodes normally have a larger voltage across them but this is partly due to the fact that there is some resistance in the silicon, and partly due to the fact that higher currents are flowing and they are operating further up the curve.

From the diagram it can be seen that a small amount of current flows in the reverse direction (reverse biased). It has been exaggerated to show it on the diagram, and in normal circumstances it is very much smaller than the forward current. Typically it may be a pico amps or microamps at the most. However it is worse at higher temperatures and it is also found that germanium is not as good as silicon.